Software developers spend enormous time in finding and fixing bugs. Can we assist them in fixing tedious bugs? The SEAL research group has developed innovative techniques that combine program analysis and machine/deep learning to assist developers and student programmers automatically fix software bugs. The resulting tools (www.iisc-seal.net/software ) have been evaluated on benchmark industrial programs and student code. This work appears in several papers:

For example, the AAAI 2017 paper referenced above address the problem of debugging programming errors, which is one of the most time-consuming activities for programmers. Therefore, the problem of automatically fixing programming errors, also called program repair, is a very active research topic in software engineering (Monperrus 2015). Most of the program repair techniques focus on logical errors in programs. Using a specification of the program (such as a test suite or an assertion), they attempt to fix the program. Since their focus is on fixing logical errors in individual programs, they assume that the program compiles successfully.

This leaves a large and frequent class of errors out of the purview of the existing techniques. These include errors due to missing scope delimiters (such as a closing brace), adding extraneous symbols, using incompatible operators or missing variable declarations. Such mistakes arise due to programmer’s inexperience or lack of attention to detail, and cause compilation or build errors. Not only novice students but experienced developers also make such errors as found in a study of build errors at Google (Seo et al. 2014). We call them common programming errors. These are common in the sense that, unlike logical errors, they are not specific tothe programming task at hand, but relate to the overall syntax and structure of the programming language. These are analogous to grammatical errors in natural languages.

This work proposes to fix common programming errors by deep learning. Because of the inter-dependencies among different parts of a program, fixing even a single error may require analysis of the entire program. This makes it challenging to fix them automatically. The accuracy bar is also quite high for program repair. The usual notion of token-level accuracy is much too relaxed for this setting. For a fix to be correct, the repair tool must produce the entire sequence pertaining to the fix precisely.

This work presents an end-to-end solution, called DeepFix, that does not use any external tool to localize or fix errors. We use a compiler only to validate the fixes suggested by DeepFix. At the heart of DeepFix is a multi-layered sequenceto-sequence neural network with attention (Bahdanau, Cho, and Bengio 2014), comprising of an encoder recurrent neural network (RNN) to process the input and a decoder RNN with attention that generates the output. The network is trained to predict an erroneous program location along with the correct statement. DeepFix invokes it iteratively to fix multiple errors in the program one-by-one. 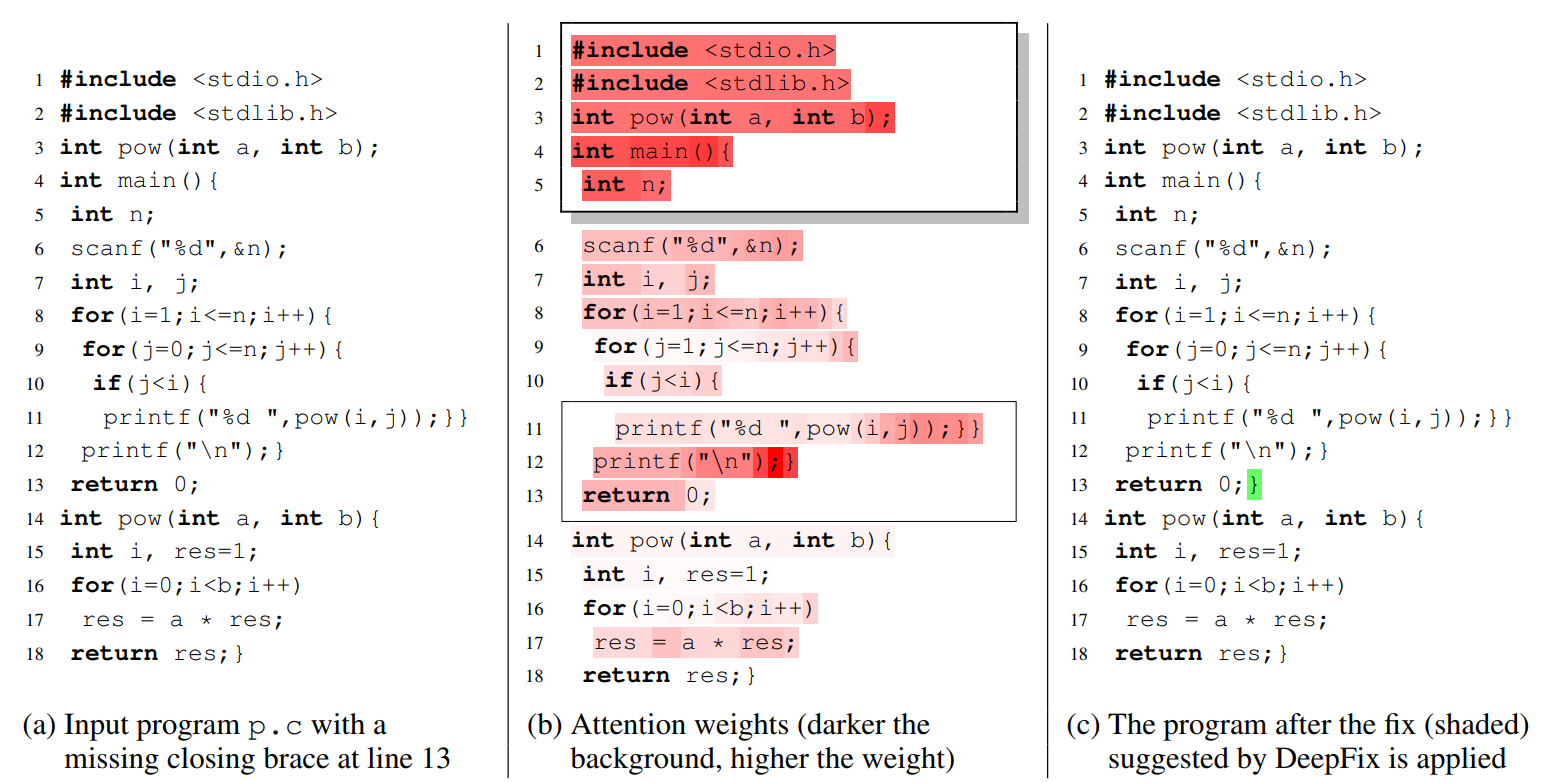