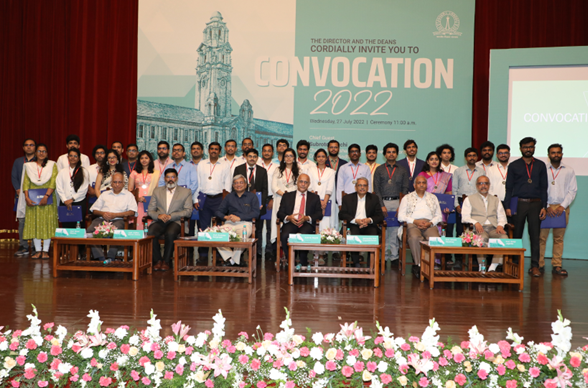 As the 2022 batch graduates of the Indian Institute of Science (IISc) received their degrees during the convocation ceremony on 27 July 2022, Subroto Bagchi (the Chief Guest) urged them to ‘give’ as they went forward and prospered in life. He said, “May you give in boundless joy and abundance. Let the world say, ‘Here is someone who gave more to life than they ever took out of it!’” He spoke about this next phase of the graduates’ lives as a great journey of even greater learning, of contribution, and impact making. “My hope for each one of you is that you’ll be outstanding human beings who will bring all the powers of knowledge and action to make science an instrument for human betterment”, said Bagchi.

Bagchi’s own charter is to create employable skills for 1.5 million youth by 2024, mostly school dropouts. He is the Chairman of the Odisha Skill Development Authority. While introducing Bagchi, Professor Govindan Rangarajan (Director of IISc) said that for this full-time assignment in the rank of a Cabinet Minister, Bagchi takes a salary of Rs 1 per year from the Government of Odisha. Along with Radha and N S Parthasarathy, Susmita and Subroto Bagchi have donated Rs 425 crores to establish a post-graduate medical school and an 800-bed multi-speciality hospital in IISc.

In his convocation address, Bagchi shared his thoughts about the idea of giving. He spoke of the gift of life from two people coming together, the gift of first breath from a nurse, the gift of food from the mother, and the gift of shelter, clothing, life skill, and education from other human beings. “Today, I am who I am because of the dozens of people in the R&D wings of companies like PSI and Wipro who gave me their knowledge in abundance.” However, he urged students to give themselves time, create, build, save, and then give. Quoting Mother Teresa, he said, “Before you give, you must have.”

Bagchi also encouraged students to think back in time, to people who directly contributed to them getting into IISc, to the person who sparked in them their joy for mathematics or physics, the people who gave them self-confidence, ambition, the power of sense making, resilience, vision, and a chance for an interview. “Someone’s act of giving is constantly shaping our own journey, defining who we may be.” In future, “someone will give you a job, someone will give you a very special assignment that becomes an inflection point in your own career, sometimes an angel will come to you to give a shoulder when you think the world is falling apart, someone also will one day give you a challenge that will completely deconstruct your sense of self, and there, you’ll have your chrysalis moment.” 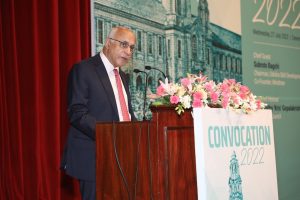 Bagchi spoke about timeless institutions being built by the generosity of people. IISc came into existence with the gift of 371 acres of land by the King of Mysore Krishnaraja Wodeyar V, and contributions (in cash and kind) by Jamsetji Nusserwanji Tata.

In 2011, exactly 100 years after admitting its first student, IISc pioneered a four-year undergraduate degree and began granting four-year Bachelor of Science (Research) degrees in 2015. Recently, four new degree programmes have been started, namely, two-year MSc in Biology, two-year MSc in Chemistry, four-year MTech in Mathematics and Computing, and MTech in Bioengineering. In the last 15–20 years, the number of degrees granted has doubled. On an average, 900 students a year graduate, with about 400 PhDs in the Faculties of Science and Engineering.

The Guest of Honour, Senapathy ‘Kris’ Gopalakrishnan—Chair of the IISc Council and Co-founder of Infosys Limited— congratulated the Institute on being ranked the No. 1 university in the National Institutional Ranking Framework (NIRF)–2022, and a global leader in Citations per Faculty in the QS World University Rankings–2023. In the context of these competitive rankings, Gopalakrishnan said, “Competition is more and more global for institutes like IISc, rather than Indian. I also believe that competition is competition within oneself… Every day, we need to think about how can we become a better Institute, how can we become a better person, a better self… how can we do things better today than yesterday?”

He pointed out that if India has to become a developed country, it will have to be built on a foundation of science and technology, a knowledge society built on our own ideas, intellectual property, products, enterprises. Gopalakrishnan emphasised that a lot of that has to come from the knowledge generated from institutes like IISc, application of that knowledge, and taking that knowledge to market – which requires funding from industries and philanthropists in addition to Government funding.

This year’s graduates have had to face many challenges due to the COVID pandemic. Addressing the graduating students, the Director extolled them on coming through this trial-by-fire with resilience. He was sure that this resilience would stand them in good stead as they went forth in life. Gopalakrishnan believed that students were feeling more confident to face the world after having gone through the experience and challenges posed by the COVID pandemic of the last two–three years. He hoped that the new capabilities (like adopting digital technologies, and using science and technology for personal and professional lives) learnt during this period and their accelerated adoption become a permanent feature in our lives going forward. 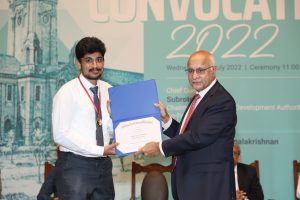 Hitesh S was awarded the Alumni Medal (2020–21) for the best MTech student in Microelectronics and VLSI Design. 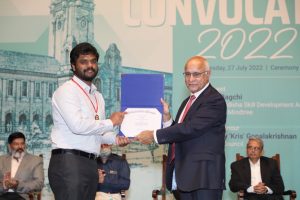 Anand Jerry George was awarded the Prof I S N Murthy Medal (2020–21) for the best MTech student in Signal Processing. 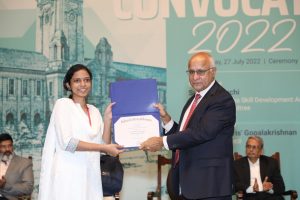 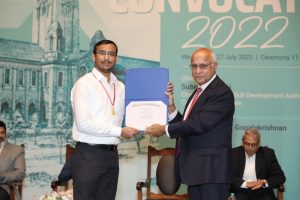 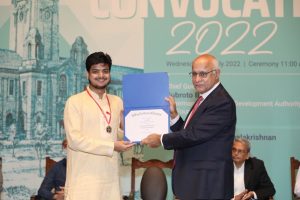 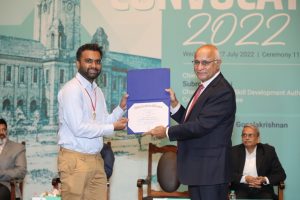 Patel Deval Nileshkumar was awarded the Dr M N S Swamy Medal (2020–21) for the best Thesis in MTech (Research) in the Department of Computer Science and Automation. 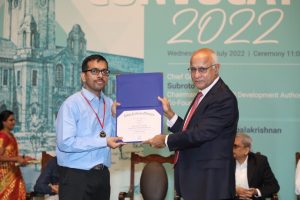 Soumyajit Gangopadhyay was awarded the Hay Medal (2020–21) for the best Thesis in MTech (Research) in the Department of Electrical Engineering. 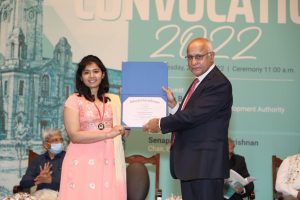 Arpita Biswas was awarded the Alumni Medal (Research) (2020–21) for the best PhD Thesis in the Department of Computer Science and Automation.

The entire convocation ceremony can be viewed at https://www.youtube.com/watch?v=DfjXpqRP2uE