SITIS was established in February 2020 as a platform to enable collaboration between Sweden and India—academia, industry, and governments—to brainstorm and use data-driven, evidence-based approaches to formulate strategies and inform Indian policy-makers to improve road safety and transportation sustainability in India. In this regard, three mission-mode projects have been undertaken by SITIS, and the status of these projects were discussed during the meeting at IISc. The delegates also discussed possible future collaborations with KSRTC to test driver fitness and behaviour. They also visited the Centre for infrastructure, Sustainable Transportation and Urban Planning (CiSTUP) at IISc for demonstrations of the bus and bicycle simulators. 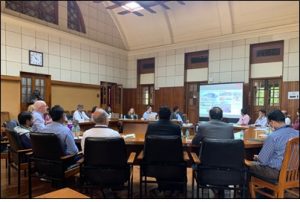 While welcoming the delegates for the event, the Chairman of the SITIS Board and Managing Director at Volvo Group India Private Limited, Kamal Bali, indicated that, “The need for mobility is going to double in India in the next 20–25 years. There will be increased migration from rural areas; the activity level is going to increase ten times. India’s GDP is anticipated to increase ten times by 2047.” In this context, he highlighted the resultant complexity of traffic, the need for well-engineered systems and good mindsets, and the importance of the SITIS initiative.

The situation in India is unique and challenging, given the condition of roads and the traffic density. The discussion with KSRTC officials revealed that at present, drivers are rated based on mileage achieved and number of accidents. There is no provision to measure driver behaviour. However, with increased funding, a more comprehensive rating of good/bad driving may be possible if a vehicle tracking and monitoring system (VTMS) were installed.

One suggestion from the Volvo group was to use a subjective measurement of driver drowsiness/sleepiness using the Karolinska sleepiness scale (KSS) that rates drivers on a scale from 1: extremely alert to 9: very sleepy, great effort to keep alert, fighting sleep. However, these verbal descriptions may not be consistent or reliable.

Another suggestion was to use wearable tracking devices to measure driver fitness and cameras to monitor their driving. However, the question is whether the drivers would be willing to let themselves be monitored? Before the commencement of such measures, the drivers may need orientation about the need for such a study. 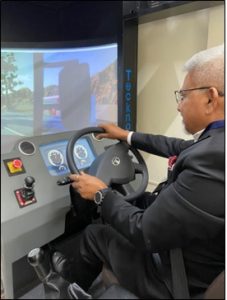 Simulators could be efficiently used to study driver behaviour. KSRTC officials were enthusiastic about letting their drivers participate in a study using the bus simulator available at CiSTUP [read more here; CiSTUP also has a bicycle simulator].

A concern raised about bus simulators was that the settings may not be realistic. For example, the other vehicles in the simulation seem to be disciplined, which is not the case in real-life, especially in India! To address this issue, videos of real-life driving scenarios could be captured and adapted for presentation to the drivers on the simulators.

Road accidents are attributed to driver behaviour, vehicle condition, and/or road condition. Although the number of road accidents in India has reduced from 4,49,002 in 2019 to 3,66,138 in 2020, and the number of persons killed has decreased from 1,51,113 in 2019 to 1,31,714 in 2020, the road accident severity (measured by the number of persons killed per 100 accidents) has increased from 33.7 in 2019 to 36.0 in 2020. In order to reduce the number of fatalities and road crashes, an understanding of the reasons for crashes is imperative. At present, this understanding comes from gut feeling, from research done in silos (non-governmental organisations, for example), from police records (National Crime Records Bureau), and also from incidents that come into the limelight such as the death of former Tata Group Chairman Cyrus Mistry on 4 September 2022 due to over-speeding and the road condition.

India needs to adopt a data-driven decision making approach. The country, only recently, has put together a national database (integrated road accident database (iRAD)), and one of the SITIS projects aims to enhance reliable data integration from multiple sources. The vision is to have approximately 30 in-depth data collection centres in the next five years, with one centre collecting detailed data on ~100 fatal crashes per year. This necessitates the training of around 500 people in data collection, 150–200 people in AIS (abbreviated injury scale; used to calculate a patient’s injury severity score (ISS)) coding, and 150 people in survey data analysis.

A detailed crash analysis is required, and this has to be correlated with injury. A statistical combination of the hospital and police reports needs to be done, in an internationally-compatible format, while maintaining patient privacy. Such a database is of paramount importance, and so is increased connectivity between ambulances and hospitals. From the medical intervention point of view, India is at a nascent stage with regard to emergency services. The Golden Hour after a traumatic accident is crucial, wherein immediate medical attention can increase the chances of survival of the injured. Here, connectivity between ambulances and the hospital command centre becomes important to communicate data on the patient’s vital signs and to receive information on required interventions. Also, much time is lost in the logistics of transporting patients/transplant organs to the hospital. Here, more automated traffic control in the green corridors (which are routes marked out and cleared for ambulances in transit to hospitals) becomes essential. Given the complexity of Indian roads, a pilot green corridor project could be undertaken in one hospital or city.

Considering another aspect of automation, although future mobility systems will include automation—targeting a safe, secure, and efficient driving experience—self-driving cars may not be possible in India given the road conditions in the country. However, vehicles need to be designed as solutions and services rather than products. The future designs must leverage data, and there must be a connection between the vehicle and the driver, such that, for example, a driver can slow down his vehicle when his dashboard map indicates that there is a school or hospital coming up. Here, zone management comes into the picture.

Although the on-ground interventions considering the above aspects would be done by India, the country can benefit from collaboration with Sweden. However, the challenges of data sharing in such a partnership need to be addressed.